It’s always a little awkward when a newcomer to the runway has a name that nobody knows quite how to say. Bed j.w. Ford (simply referred to as “bed-ford,” and not “bed jay-double-you ford,” in case you were stuttering), is one such case. A menswear brand founded in 2010 by designer Shinpei Yamagishi and director Keisuke Kohsaka, it’s been steadily gaining popularity among in-the-know menswear pundits for an impressive attention to detail. This was the duo’s first time showing at Amazon Fashion Week.
The ropey name is a shame, because once you got past it, the clothes were really quite fantastic. If anyone thought the Japanese had lost their touch at Tokyo this season, Bed j.w. Ford made it clear that the city continues to incubate some promising young talent.
The brand showed dark layered tailoring that draped elegantly yet still felt masculine; Yamagishi intentionally avoided making anything oversized and trousers with tastefully executed holes on the side of the leg took the knee-cut trend in a sophisticated direction. Suede slingbacks in navy and camel grounded the clothes nicely, and the silk nightwear-ish items imbued the collection with a romantic texture. Where the brand truly stood out, though, was in its erudite use of color. Flashes of red, navy, gold, and sea green were used to wonderful effect against the black, and the fabrics were all noticeably high-quality (although, insists Yamagishi, his brand is “not about the fabric”). Overall it read like Yohji Yamamoto meets Dries Van Noten; while the influence of these designers is clear, Yamagishi’s artistry makes it look like appreciation rather than appropriation.
READ MORE 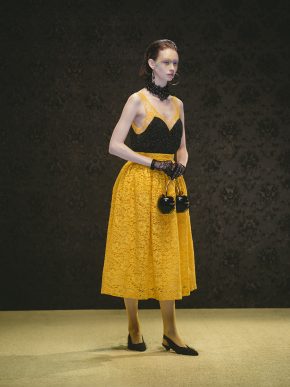