“Being who you are is an act of defiance,” says Teddy Quinlivan in one of the striking video teasers for Maison Margiela’s Mutiny—John Galliano’s first signature scent for the house—that was projected around the room before the designer unleashed his Maison Margiela collection. Quinlivan is one of six muses for the perfume—alongside Hanne Gaby Odiele, Sasha Lane, Willow Smith, Molly Bair, and Princess Nokia—who “each have a story to tell,” as Galliano has averred. He has found his muses’ shared unwillingness to accept the status quo (if it is not acceptable) deeply inspiring. Those YouTube videos set the scene for Galliano’s provocative, status quo–challenging Maison Margiela show, set to contemporary iterations of “Tainted Love,” mixed as always by his longtime accomplice in sound, Jeremy Healy.

Soft Cell’s “Tainted Love” was the club anthem of the moment in 1981 when Galliano was studying at Central Saint Martins during the day, working to help pay his way through college as a costume dresser at the National Theatre in the evening—and hitting clubs like the minuscule Cha-Cha and the epic Camden Palace through the night. It was a see-and-be-seen world that encouraged sartorial freedom of expression and gender fluidity, just in case anyone thought that was a 2018 concept. The girls wore zoot suits and quiffs; the boys wore skirts and Marcel waves (and I speak from personal experience). George O’Dowd, soon to be known as Boy George, would take this radical clubland message to the world stage, and Leigh Bowery, a strapping young man from Sunshine, Australia, would take it to even more anarchic heights while elevating dressing to performance art at his own nightclub, Taboo. Galliano remembers of this time that he was “always questioning the accepted norms or conformity. We were trying to make our own rules. We believed it, we lived it, and we went out looking like that.” It is a memory world that is impacting the work of young designers such as Palomo Spain, Charles Jeffrey Loverboy, and Matty Bovan (who dedicated his own Spring 2019 collection to Judy Blame, the jeweler and tastemaker who ran the Cha-Cha Club alongside the fabulous chameleon Scarlett Cannon, and who passed away earlier this year), all of whom are looking at Galliano’s ’80s experiments and the nightlife of the time for inspiration.

“Everything is about a memory,” said Galliano backstage. He doesn’t need to look at Pinterest mood boards to recall those moments when he was “serving some looks.”

“It doesn’t matter who wears it,” he said, and with this in mind, he fit the entire collection on one of the snake-hipped boys who stomped the runway, draping suits on the bias, golden brocade bustiers, and what looked like repurposed 1950s beaded frocks over tapering second-skin pants. Taking his cue from his gender-unspecific Fall Margiela Artisanal collection for men, Galliano cut Crombie coats as capes with sleeves merely suggested with seaming, like the visites that Victorian women wore over their bustles to make their calls (Martin Margiela himself referenced these garments in the early ’90s). The idea of what Galliano calls “nomadic couture” also means that one garment’s traditional purpose shifts—a swimsuit becomes a dress, a party frock shadows a classic men’s jacket, a cardigan’s sleeves seem to enfold a coat although they are physically built into the garment, and a trench is actually a dress. The idea of a garment as a work in progress is suggested by a dress embellished with the vestigial stitching seams—used in conventional tailoring to define the future shape of the garment—mapping out a future jacket.

There are ideas aplenty to gladden the heart of serious fashionistas, but beneath the apparent madness there is also serious method—and clothes and accessories (the messenger bag, the rainbow-lensed eyewear) that point to the increasing commercial success Galliano has had at Maison Margiela since he took the reins of the house in 2014, success that has been achieved by staying true to his vision.

As Galliano himself put it, in today’s Generation Z world “there are no rules—you write the book.” 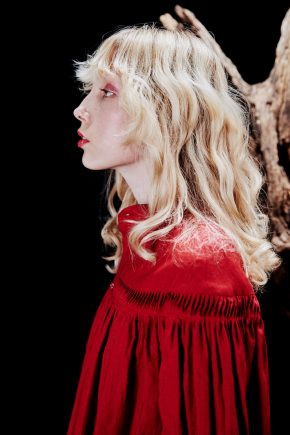 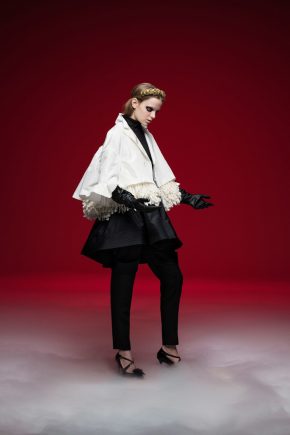