If you’ve been watching Victoria Beckham’s street style closely, you’ll have noticed that she’s lately shifted her look into a more laid-back gear. Unpack the wardrobe she took to New York Fashion Week earlier this month, for example, and the dominant theme was slouchier and more down-to-earth than we’ve seen from her before: Picture a pair of baggy trousers, a crisp white blouse, and chic flat Grecian sandals, for starters. That approach to dressing seems to have been percolating in her design studio, too. Having loosened up the silhouette of her dresses for the runway, she’s now doing the same thing with pants for Victoria, Victoria Beckham.

Geographically speaking, the inspiration for her new collection started in Los Angeles, a place that is something of a second home (or third, if you count New York and London) for Beckham and her family. While she often tends toward a monochromatic aesthetic, novelty prints aren’t totally out of her wheelhouse. She happily flaunts that more playful side with her secondary line, and the hummingbird motif on an elegant kimono-style jacket was drawn from the bird-watching she does from her dressing room in L.A. A Hawaiian-style shirt printed with a map of Palm Springs had a similar youthful energy that felt right in the mix of sportswear-inspired, oversize tailored pants and minimalist blazers. She’s been pushing her denim into quirkier territory, with denim shirts and skirts that were patched with palm trees. But it’s easier to imagine Beckham and chic women like her making the tuxedo carpenter jeans part of their everyday uniform.

The British designer spends way more time on planes than the rest of us, and it’s fair to say her polished looks at the departure gate have raised the bar on modern airport style. But judging by the comfy buckled slides she showed with every outfit in her lookbook, she might be one step closer to ditching her traveling stiletto heels. 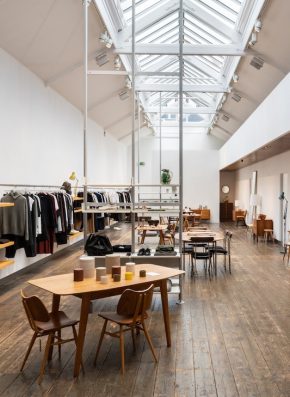 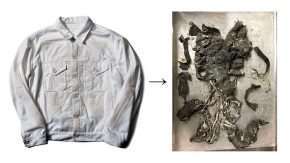